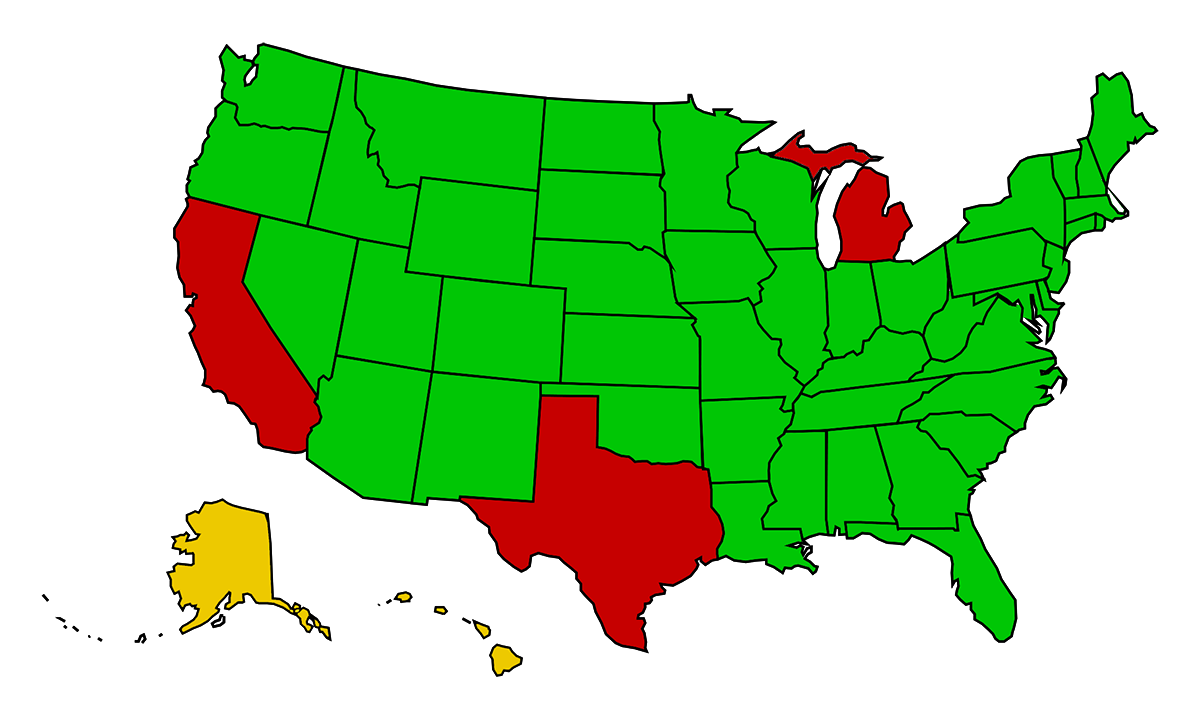 States marked in green are eligible for sales and support contract execution. Terms prohibit support to persons both natural and ens legis (legal fiction, i.e. corporations and estates) in red. Use of any proxy to support a service or business with nexus in the marked states will be refused on sole determination of the firm (RACCOON TECHNOLOGIES INCORPORATED).

For Cause Denial of Service is due to criminal activity sustained by the State Attorney General of each region marked in red, related human trafficking and child kidnapping to extort, blackmail, and in violation of Federal Law under 31 USC § 3729(a) qui tam civil suit complaint filed in $44 billion fraud, a criminal complaint, and violation of UNIVERSAL DECLARATION OF HUMAN RIGHTS in foreign criminal enterprise activity themed a premeditated kidnapping to export U.S. technology in false title documented in 2001-2021, 2002, 2011, and 2012 letters in violation of Oklahoma Constitution Article XXIII-1A "Right to Work" protections - themed a crime by Constitutional rule, and Federal Felony per 18 USC § 241 and 1589.

Exemptions for Native Peoples and Tribes of Hawaii and Alaska apply, affording separate and full service to all Native Tribal People of registry, as these Soverign Entities are not incorporated or at-fault in the prior complaint against the abuse and export, fraud, and threats of murder employed by PEOPLE'S REPUBLIC OF CHINA, NATION OF JAPAN, KINGDOM OF SWEDEN, NORWAY, ICELAND, and assiated firms disclosed to be resident in UNITED KINGDOM, REPUBLIC OF GERMANY, and SOUTH KOREA who were enjoined by commercial activity in the dilution of registered marks of the Native People of the Oklahoma Territory over 2001-2021 conspiracy against rights and to extort for forfeiture of advanced computer sciences and techniques themed trade secrets and copyright, trademark, and service marks detailed in written scheme to interfere with the inheritance by kidnapping to conceal and abuse ICANN and International registries in premeditated spoliation of registries of the BERNE CONVENTION and for export of dual-use technology contrary the WASSENAAR ARRANGEMENT to PEOPLE'S REPUBLIC OF CHINA via NATION OF JAPAN in nexus of registry and $7 billion joint labor practices fraud.

States and Territories under review include:

Other Areas of Interest in Ongoing Attacks Against RTI Networks

RTI technology and services are therefore not eligible in NATION OF JAPAN, PEOPLE'S REPUBLIC OF CHINA (PRC), REPUBLIC OF GERMANY, CANADA, VENEZUELA, BRAZIL, AUSTRALIA, SHANGHAI, REPUBLIC OF FRANCE, ICELAND, NORWAY, SWEDEN, DENMARK, UKRAINE or their related ports and subsidiaries in SOUTH KOREA, UNITED KINGDOM, or other areas not indicated on the above map. Efforts to implicate RUSSIAN FEDERATION in support of genocide activity in Donbas Region by UKRAINE (Kiev government) are further rejected assistance as war crimes and fraud in cooperation with white nationalist activity and extremist human trafficking cited in STATE OF TEXAS and STATE OF CALIFORNIA letters to the firm on taking of hostages in 2001-2021 to extort and export arms to PRC.

Because of Mr. De Raadt's supporters (BSD operating system) attempt to force RTI employees into human trafficking in 2001-2021, NO RACCOON TECHNOLOGIES INCORPORATED SOFTWARE will support or be licensed to operate on BSD products or servers. Period. Threats to harm the child of our lead engineer will prohibit perpetually any BSD certified person or product from receiving support.

Russia, our traditional enemy as a NATO ally, has been less of an asshole than Theo De Raadt's people in Texas and Ontario - ultimately leading us to side with the Donbas sepratists after Ukranian cyber-terrorists assaulted our network in increasing degree leading up to Russian troops blowing them off the map. Nice shot, man. Similar abuse exceeding 16 Gbps flows and 8 million ICMP flows from NTT subsidiaries affirm a NO SERVICE to any data center enjoined any contract or business with NTT or its affiliates (COGENTCO). In addition to direct and sexual threats in 2020-2021 supporting letters describing abuse of a child, our contractors regard the conduct of NTT / ROBERT HALF TECHNOLOGY employees to be criminal in 18 USC § 2261A activity.

Repeated use of Ann Arbor (Michigan) networks to support the prior fraud, in concert with San Jose regional abuse, affirm our observation of NTT AMERICA labor group activity themed active in an ongoing XXIII-1A felony violation of Oklahoma State Rights and unlawful business practices prohibited by Antitrust Regulations governing such foreign sovereign owned (23% Government of Japan) activity in the United States. Refusal to register this abuse in TITLE IV GRANT fraud by STATE OF TEXAS on concealment of a child to extort in false trail and attempted murder, underline our right to refuse service on sustained threats of murder, arson, and blackmail themed criminal and to the reputation and right to work of RACCOON TECHNOLOGIES INCORPORATED under such unlawful concealment to bar ordered possession of a child and public use of NTT networks to promote a terrorist hoax.